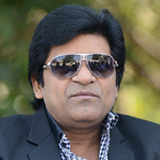 Ali
Cast name: Ali Basha
Ali is a South Indian actor who has acted in more than 1000 films in Telugu, Tamil and Bollywood film industries. He is a regular actor in Puri Jagannath and Pawan Kalyan movies. He recently received a Doctorate honour. The Academy of Global Peace conferred an honorary doctorate to Ali on 25 May 2013 at Coimbatore, Tamil Nadu. He hosts as Alitho Jollygaa Show in ETV Telugu.